Free Shipping
Please allow your location to be read or register an account with SKC Inc. to view pricing
Part Number: 225-9598A

The BioSampler® collects bioaerosols in liquid for sample times up to eight hours when used in connection with the sonic-flow BioLite+ pump. Use BioSampler for IAQ investigations, infection control in hospitals and veterinary clinics, biological research, infectious disease investigations in public buildings, safety concerns in the food handling industry, and workplace exposure in pulp and paper mills and wastewater treatment plants.

Applications
Use the BioSampler with a sonic flow sample pump for area sampling to locate sources of biological contamination, identifying and measuring levels of microorganisms, evaluating the effectiveness of control measures, or monitoring bioaerosol releases for many applications including:

SKC BioSampler for 8-hour Sampling of Bioaerosols into Liquid

Bioaerosols are airborne particles of biological origin (e.g., bacteria, fungi, pollen, viruses) and their by-products such as endotoxins or mycotoxins and other fragments. While there is no standardized method for bioaerosol collection at this time, many organizations, including SKC, are researching improved measurement techniques. The BioSampler is a result of SKC's work with leading scientists at the University of Cincinnati.

Sampling for Bioaerosols
Many of the same techniques that are used for non-biological aerosols can be used for bioaerosols. However, to properly evaluate bioaerosol samples, collection procedures must ensure the survival or biological activity of bioaerosol particles during and after collection.1 The BioSampler is highly effective at collecting viable samples. 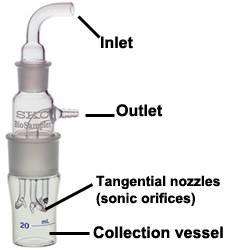 The BioSampler is a highly efficient glass collection device that requires a high-volume sonic flow pump to trap airborne microorganisms for subsequent analysis. Externally the BioSampler resembles an all-glass impinger such as the AGI-30.* Inside, it contains specific design features that overcome some of the sampling problems evidenced while using impingers for bioaerosol collection. The BioSampler's inlet design limits the collection of airborne particles to those that would pass through the human nose. The sampler is normally used with a liquid that swirls upward on the sampler's inner wall and removes collected particles.

The BioSampler can be used with non-evaporating collection liquids that have a viscosity muchhigher than water such as ViaTrap, a special mineral oil forsampling bioaerosols. When used with ViaTrap, the BioSampler's collection efficiencystays constant over an 8-hour sampling period. ViaTrap mineral oil may notbesuitablefor PCR analysis. The use of sterile water may be required.

Sampling with the BioSampler
The BioSampler must be operated with a sonic flow pump, such as the BioLite+ Sample Pump, that can maintain 15 inches mercury or 0.5 of an atmosphere of downstream pressure in the system. The BioSampler’s three tangential nozzles act as critical (sonic) orifices, each permitting 4.2 L/min of ambient air to pass through for a total flow rate of approximately 12.5 L/min.

Advantages of the BioSampler
There are many advantages to using the unique BioSampler in place of a standardimpinger.

Greater Sampling Efficiency Over Longer Sampling Times
The BioSampler provides greater efficiency over longer sampling times because it can be used with non-evaporating liquids that have viscosities higher than water. Sample efficiently over an 8-hour workshift with the BioSampler using ViaTrap mineral oil. ViaTrap mineral oil may not be suitable for PCR analysis. Typical sampling times with standard impingers and impinger liquids are only 1 to 1.5 hours. The BioSampler's longer sampling times also provide increased sample volumes for detecting organisms at lower concentration levels.

Less Particle Bounce
The BioSampler's nozzles eject particles at an angle to the sampler's inner wall significantly reducing particle bounce and preserving aggregates of organisms. In standard impingers, microorganisms are typically damaged from collision with the impinger base plate.

Performance Criteria
Although the topic of much discussion, no performance criteria for bioaerosol sampling have been adopted at this time (i.e., experimentally determined values to assess the suitability of a collection method for a specific application).4

Two performance characteristics are critical when choosing a bioaerosol sampler: 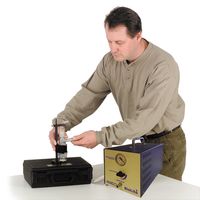 These turnkey sampling systems makes bioaerosol sampling easy. The Deluxe kit features one BioSampler for the efficient collection of airborne microorganisms, two additional 20-ml collection vessels (bottoms) with caps for sending samples to a laboratory, a case with mounting rod for securing the BioSampler during sampling, ViaTrap* (an efficient collection medium for sampling over an 8-hour period), and BioLite+ sample pump (vacuum-type, sonic flow) mounted in a protective housing with handle. The BioLite+ features a vacuum gauge to indicate sonic flow and a valve to adjust flow.

* ViaTrap mineral oil may not be suitable for PCR analysis.