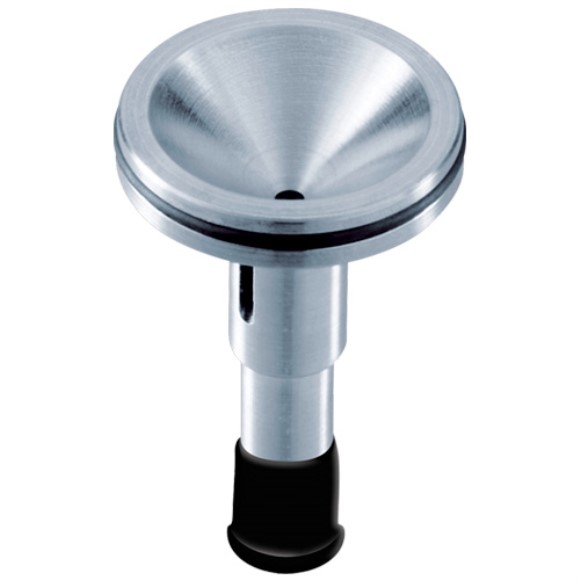 Free Shipping
Please allow your location to be read or register an account with SKC Inc. to view pricing
Part Number: 225-01-02 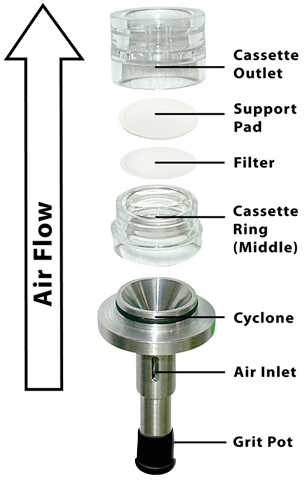 The SKC Aluminum Cyclone is a lightweight respirable dust sampler that is used with a filter loaded into a three-piece filter cassette. The cyclone separates dust particles according to size. The respirable particles collect on a filter for analysis while larger particles fall into the grit pot and are discarded.

The ACGIH, NIOSH, International Organization for Standardization (ISO 7708), and European Standard Committee (CEN) specify a collection efficiency curve with a median cut-point at 4 µm. When performing respirable dust sampling with cyclones, it is important to adjust the flow rate to give the closest possible match over the whole curve (not just at a single point). The ACGIH/ISO/CEN curve requires using the flow rate that minimizes the bias of the cyclone separation from this curve.

OSHA Publishes Final Rule on Respirable Crystalline Silica
In its final silica rule, OSHA sets a new permissible exposure limit (PEL) of 50 µg/m3 across all industries covered by the rule and abandoned the previous silica PEL formula. In addition, the OSHA final silica rule states that any sampler conforming to the ISO 7708/CEN criteria (50% cut-point of 4 µm) can be used for workplace silica and lists examples of samplers, including the SKC Aluminum Cyclone (final rule page 16439). The ISO 7708 criteria have been adopted by NIOSH, ACGIH, and many other global occupational hygiene organizations. SKC Aluminum Cyclone performance data, relative to the ISO 7708/CEN criteria, was published in the Journal of Aerosol Science, 29, 1998.

The SKC Aluminum Cyclone is available in two sizes: 25 mm for use with 25-mmthree-piece cassettes and 37 mm for use with 37-mm three-piece cassettes. Thefilter material, pore size, and support pad must be selected as specified bythe sampling method used. A cyclone's collection efficiency may be influencedby electrostatic effects. If the cyclone carries a net charge, particles of thesame charge will be repelled by the cyclone and will not be sampled efficiently.SKC cyclones are constructed of conductive materials that eliminate the staticproblem associated with nylon (non-conductive) cyclones.


Operation
The SKC Aluminum Cyclone is used with a three-piece filter cassette,a filter cassette holder, and a constant flow personal sampling pump such as the SKC AirChek Series sample pumps.

A representative weighed filter with a support pad is placed into a three-piece cassette (with inlet section removed) and attached to the cyclone. The cyclone-cassette assembly is then attached to the filter cassette holder. The pump with thecyclone-cassette assembly in line is calibrated with a standard calibratorsuch as the chek-mate 375 Series. The grit pot remains on the cycloneduring calibration and sampling.

The cyclone is clipped to a worker’s collar or pocket as close to the breathing zone as possible. The pump is clipped to the worker’s belt or placed in a protective pouch. The pump is activated and the worker wears the apparatus during the entire sampling period. After sampling, the filter cassette is removed, sealed, and sent with all data to a laboratory for analysis.

Calibration Adapter
The aluminum calibration adapter fits over the stem of both the 25 and the 37-mm cyclones and allows standard 1/4-inch ID Tygon tubing to be attached for calibrating the airflow. 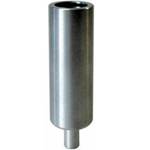 Holder for 25 and 37-mm Cassettes
The lightweight filter cassette holder is designed to attach to a worker's collar and will accommodate either 25-mm cassettes with cowl or two or three-part 37-mm cassettes with or without a cyclone. 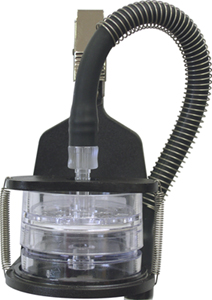 Cyclones
Named for the rotation of air within its chamber, the cyclone is a particle size selector for sampling airborne particulates. It functions on the same principle as a centrifuge: the rapid circulation of air separates particles according to their equivalent aerodynamic diameter with the respirable particles collecting on the filter while the larger particles fall into the grit pot to be discarded. The cyclone/filter assembly is attached to a worker's collar near the breathing zone. 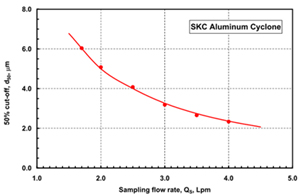